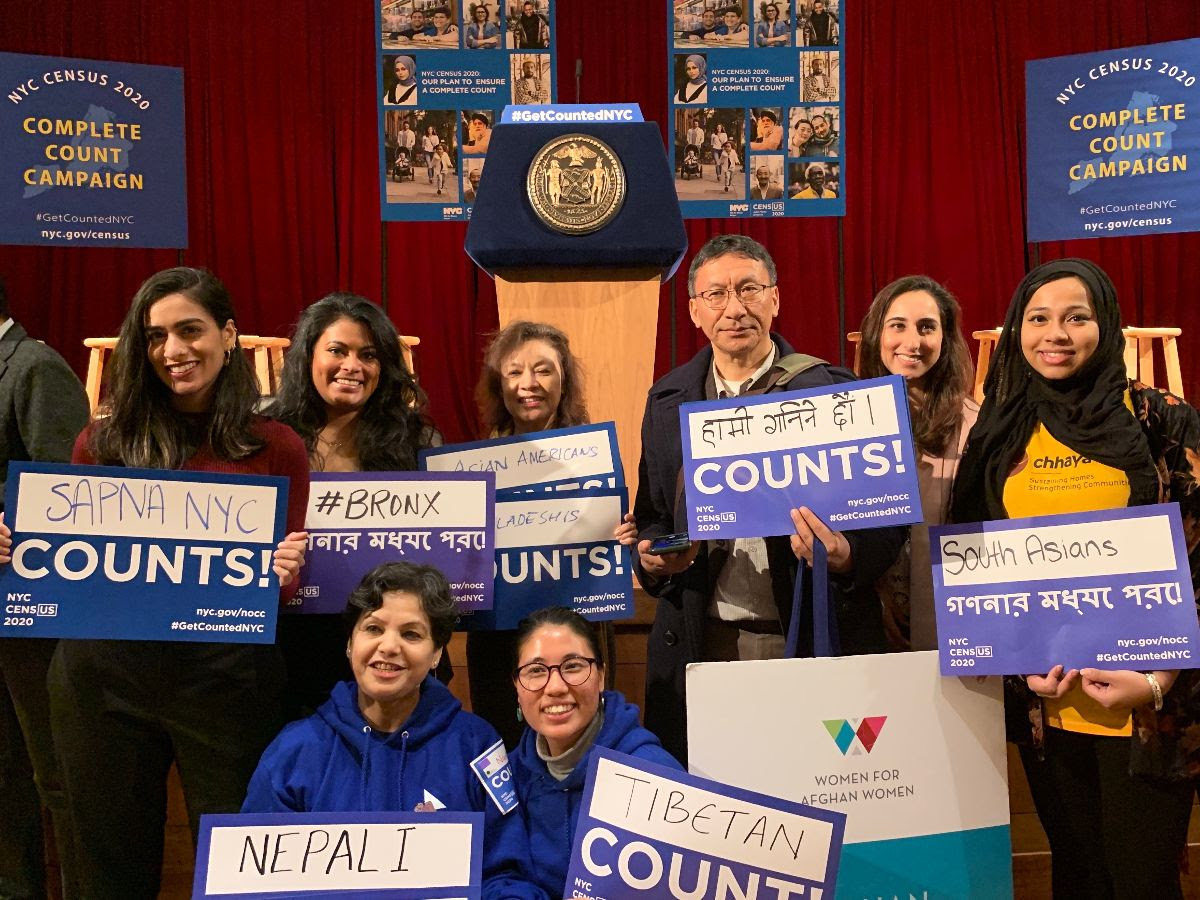 Taslima scrolls through her contact list, making note of all the people she knows in the area. She has lived in the Bronx for 12 years now, establishing many relationships and connections with other Bangladeshi residents in the area. She first calls all her contacts and then heads over to their houses to talk to them about the Census and have them fill out census commitment cards.

Taslima is a part of Sapna NYC’s Census Action Group, comprised of 10 community members dedicated to Census outreach and completion. AG Members were trained in-house on the importance of the Census, how to complete it, and outreach skills. They were tasked with reaching their networks and connecting with new people to reach pockets of the community that may be more isolated (Now due to COVID-19 social distancing guidelines, AG Members are only making phone calls).

“Usually people don’t like to give out any information, even if it’s their address or phone number. But because they know me and trust me, they know that their information will be safe,” says Taslima. “It’s important for them to see people who are from their community talk to them about the Census.”

The Action Group is part of Sapna’s Census 2020 Project. Sapna is a recipient of the New York City Complete Count Fund, an initiative by the city to fund community-based organizations around the five boroughs to help reach marginalized and historically undercounted communities.

“Community-based organizations like Sapna often work for empowering the most disadvantaged members of a community. In that sense, the CBOs are playing a crucial role of spreading the importance of Census among those who need to know about it most. A CBO acts as the bridge between the government body and the community. The CBOs tailor the messages as per community needs,” says Trisha Datta, Sapna’s Census Outreach Organizer.

The Census is vital for our communities. It determines federal funding, state and city planning, representation in government and business research for the next ten years. Federal funding programs guided by the Census distribute $1.5 trillion per year for 10 years across the states. The amount of funding allocated is guided by Census numbers so an undercount means losing dollars.

“The more people get themselves counted, the higher the chance of fair distribution,” says Trisha. “In New York City, the Bangladeshi population is one of the fastest growing immigrant groups over the past few decades. According to the last census, it is the ninth largest foreign-born group. Compared to other large immigrant groups, poverty and overcrowding rates are higher in this group. Due to little or no English literacy, many Bangladeshi immigrants cannot advocate for themselves, therefore become deprived of their rights and benefits. Census will give this community a voice.”

Sapna staff has been working tirelessly to get our South Asian community in the Bronx counted. We have organized workshops, worked with local city council members, talked to the press, spoken at local events, put out flyers, sent out texts and are making phone calls everyday. While our outreach techniques have shifted due to COVID-19, we remain committed to reaching as many people as we can through texts, phone calls, and emails.

If you have any questions, email us at info@sapnanyc.org. If you have any family or relative who needs help with completion, please email us with the best phone number to call and staff will get in touch. To complete the Census online, visit www.my2020census.gov.

Below are some of our photos, videos, and press links from our Census Project:

As New York City legislators work through the budget process for Fiscal Year 2022 (which starts July 1, 2021), Sapna staff is.

The coronavirus pandemic has shown the value of digital literacy, especially as lockdowns around the country have forced millions of.